By Jonathan Becher on March 10, 2019 in Business, Culture, diversity and inclusion, Leadership, sports

Research shows that businesses with more diverse workforces perform better financially and are more innovative. Similarly, diversity and inclusion is good for the business of sports. The more that sports teams embrace the diversity of the community they are in, the more likely their fans will embrace them back.

The National Hockey League (NHL) uses the international reach of the game of hockey to help drive positive social change and foster more inclusive communities. Under the slogan Hockey is for Everyone™, the NHL takes a unifying and supportive approach:

We believe all hockey programs – from professionals to youth organizations – should provide a safe, positive and inclusive environment for players and families regardless of race, color, religion, national origin, gender, disability, sexual orientation and socio-economic status.

Over the years, the San Jose Sharks have embraced these ideals. From Sikh and Filipino heritage nights to Los Tiburones themed events as part of Hispanic heritage month, Sharks fans in the SAP Center represent the amazing cultural diversity that is the Silicon Valley / Bay Area.

At last year’s Hockey Is For Everyone Night, the San Jose Sharks partnered with You Can Play, an NHL-supported non-profit organization that works to ensure the safety and inclusion of all in sports including LGBTQ athletes, coaches, and fans. Sharks players taped their warm-up sticks with Pride-themed hockey tape and proceeds from these autographed sticks were donated to charity. The next Hockey is for Everyone Night at SAP Center will be Sunday, March 31 when the Sharks play Calgary in what may well be a battle for first place in the Western Conference.

The SAP Center also works hard to support the accessibility needs of our guests. Assistive Listening Devices are available at no charge. Guests with disabilities may bring their service animal with them. In addition, SAP Center offers safety sensory kitsto fans who have sensory sensitives (e.g. Autism, Neurological Impairment, PTSD, or Dementia).

On the lighter side, the idea of hockey is for everyone can be interpreted literally and extended in unexpected ways. Through an event called Pucks & Paws, we allowed dog owners to bring their pets to a San Jose Barracuda hockey game. While the majority of the attendees were hockey fans, many were first-time attendees who were attracted by the spectacle of bringing their dog to an arena and spending time with their pet – the hockey game was secondary. 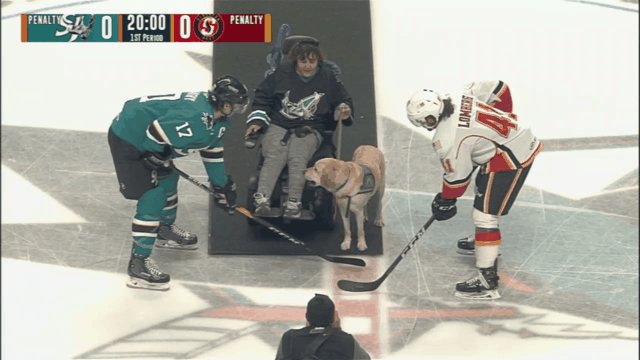 We are all unique. Let’s celebrate our differences. You don’t even have to like hockey. Doggonit.

Becher's Bytes, diversity, hockey, hockey is for everyone, inclusion, Pucks & Paws, You Can Play

Does Swearing Reduce Pain?
The Power of Suggestion

Join 27,286 other subscribers
Tweets by jbecher

Things to Check Out